ALONG THE TRIBUTARIES OF RIVER ANGARA 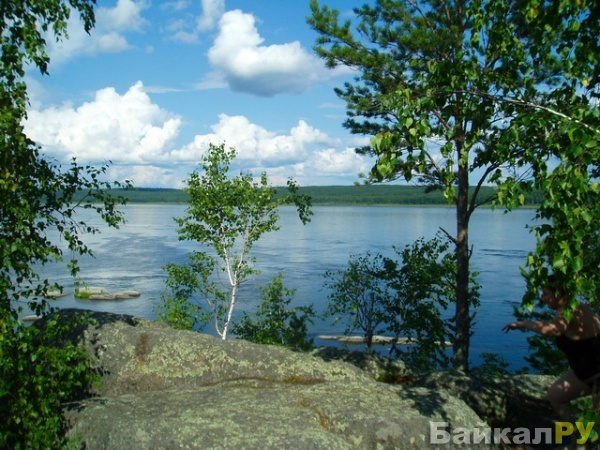 River Angara basin has a thick network of rivers. About 51 thousand water-flows with combined length of 220 thousand km order, are counted there. The major part of this hydrographic network is constituted by small rivers, while 20 rivers exceed the length of 200 km, and only six rivers are longer than 500 km (River Angara itself, rivers Tchuna, Biryusa, Oka, Ilim, Iya). River Angara receives the major high water-content tributaries, that originate in the East Sayan mountains — Irkut, Kitoi, Belaya, Oka and Iya, and River Taseyeva, formed by the confluence of Tchuna (Uda) and Biruysa, from the left. The right tributaries that flow from medium-elevated Central Siberian Plateau, are short and low in water-content, excluding the larger River Ilim. The main tributaries of River Angara have mean discharge in the estuary exceeding 100 m³/c.

A trip along the tributaries of River Angara is difficult to a large extent due to fact that some of them are not navigable and almost all of them lack any kind of passengers traffic. Even on the navigable rivers — Taseyeva, Tchuna, Biruysa, affluent lower reaches of Oka, Iya and Ilim, only institutional aquatic traffic is operated (excluding the lower reaches of River Oka). Thus, in order to fully understand and appreciate the beauty and distinctive character of River Angara tributaries, only private means of transportation, such as inflatable boats, rowboats or motor-boats, rafts, canoes or catamarans, could be employed for travelling.

The upper reaches of the left tributaries of River Angara — Irkut, Kitoi, Belaya, Oka, Iya, Uda and Biruysa are accessible for downstream float only for well-trained tourists: many channels being classified in IV-V, and even VI categories of difficulty. The rivers are characterised by deep valleys with steep, often sheer slopes of rock. The stretches with abrupt altitudinal differential and impetuous current, with rapids and water-falls are alternated with the ones of expanded river bed and bottom bars. The rapids, water falls, bottom bars, drift-wood jams create great obstacles for travelling, though the picturesque vistas of mountainous and forested landscape, virginal purity of water, exciting experiences and wonderful fishing keep attracting aquatic tourists.

Breaking away from the mountains of East Sayan down into the Sayan Mountains foothill depression and Irkutsk-Tchermkhovo plain, the rivers change their character in the broad valleys and spacious flood-lands. There are numerous islands there. At the intersections of trapp formations the valleys narrow, and the passage could be again blocked by rapids and bottom bars. However, the lowland reaches of the main River Angara tributaries are rendered in II-III category of difficulty and do not present major obstacles for trained tourists. The water in the tributaries is usually warmer than in River Angara itself, and quite comfortable for bathing, while fishing is more interesting and productive than that in River Angara reservoirs.

Of all the tributaries of River Angara, only the lower reaches of River Oka, that turned into Oka Reach of Bratsk Reservoir, is equipped with passengers traffic. Travelling from Bratsk upstream Oka Reach, the ship calls at several ports: Ozemyi, Kaltuk, Pervomaiskii, Omskii, Tynkob’, Khvoinyi, Oktyabr’sk, Tukovskii. Picturesque surroundings and large warm bays make this route attractive for tourists.

Aquatic route around the upper reaches of River Ilim is also of interest. One usually gets there by the old boat-trail from River Angara through the village Podvoloch-naya. In spite of its predominantly lowland character, River Ilim runs in a deep and narrow valley, blocked by bottom bars in many places. The trip would end in the settlement Shestakovo on the railroad, where the effect of Ust’-Ilimsk Reservoir affluent already in evidence.

Float-trips along the smaller tributaries of River Angara — Mura, Tchadobets, Kova, Koda, Irkeneyevaya, Kamenka, are also popular with local tourists. Strange, as it may appear, there are not many locals of The Riverside, who could boast of travelling River Taseyeva — the tributary of River Angara with the highest water-content, the length of which is only 119 km. One can reach River Taseyeva from the railroad Reshoty-Karabula, after floating down either one of its tributaries — Tchuna or Biryusa.

There are towns and settlements on all the major tributaries of River Angara. The city of metallurgy Shele-khov is located not far from the estuary of River Irkut, while Irkutsk is located right at the confluence of the two rivers. Blocks of apartments of the city Angarsk stretch along the dry bed of River Kitoi. There is a chain of municipalities on River Belaya: an old village Bel’sk (XVII century), township Mishelevka with the famous Khaitin-skii Porcelain Plant (early XIX century), the settlements Taiturka, Srednii, Novomal’tinsk. Midstream River Oka, at its intersection with the railroad, there is the town Zima (38.6 thousand population), while a young city of chemical industries Sayansk, that is growing nearby, already got ahead of the old Zima by population (45.5 thousand). More municipalities are to be found in similar geographic and transportation-related locations: Tulun (53.8 thousand population) on Iya, Nizhneudinsk (44.0 thousand population) on Uda, Taishet (43.0 thousand population) and Biruysinsk (12.1 thousand population) on Biryusa. To the oldest towns of The Riverside belongs Nizhneudinsk, founded in 1648 and granted the status of a town in 1783. In Niznheudinsk administrative district, in the mountainous reaches of upper River Uda, is located a little-known exotic land of Tofalariya, populated by several hundred individuals of a small nationality Tofalar.

Angara - the daughter of Baikal → THE LEGEND OF ANGARA