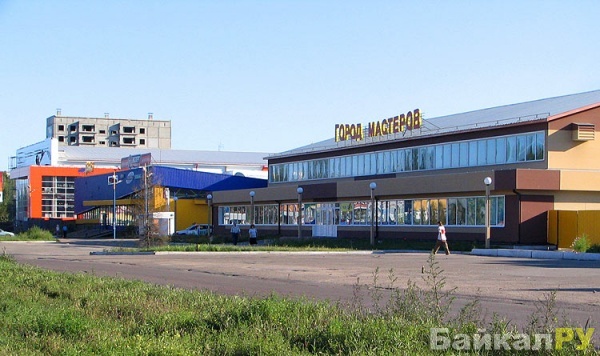 A trip from Irkutsk downstream River Angara usually ends in Bratsk. This route 613 km long falls into two distinctive stretches. The upstream reaches 113 km long from Irkutsk Hydro down to the city Usol’ye-Sibirskoye and still somewhat farther on (Narym river-arm opposite the estuary of River Belaya), where River Angara mostly preserved in its natural condition of rapid currents, numerous islands and river-arms. Still, the largest industrial centres of The Riverside — Irkutsk, Angarsk and Usol’ye-Sibirskoye gravitate strongly towards this comparatively short stretch of the river.

One of the largest centres of economy, culture and science of Siberia — the city Irkutsk is located in the confluence of River Angara with its largest tributary, River Irkut. This is the biggest city in River Angara basin (population 639 thousand), administrative centre of Irkutsk Region. The first Russian settlement in the whereabouts of the contemporary city — the Irkutsk Outpost on the Dyachii island in the estuary of River Irkut was founded in 1652, and in 1661 a «Royal Fortalice» was built, which had become the centre of the province and later, in 1686, was awarded the status of a city. Due to the exceptionally favourable location on the junction of all the major land-and waterways to Yakutiya (by River Lena), Transbaikalia, Amur Riverside, China (across Lake Baikal), Mongolia (along River Irkut), Upper and Mid Angara Riverside (by River Angara), Irkutsk turned into the capital of the territory not only within the basins of River Angara, Lake Baikal and River Lena, but also of all the eastern part of the country, developing into a major administrative and trade centre of Siberia. For a long time during the first half of the XIX century the Governor General of Irkutsk ruled both West and East Siberia, Russian Far East and Russian America down to California; in fact, 2/3 of the territory of former Russian Empire was managed from Irkutsk. There was no other city in the country except the two capitals — Moscow and St. Petersburg, to govern such enormous territory.

The historic significance of Irkutsk as a centre of scientific exploration of Siberia and Russian Far East, Russian America and Central Asia, as a major junction of trade routes to the oriental countries, and an all-Siberian seat of culture and education, is great. Its superior standing contributed greatly to the high concentration of architectural masterpieces, historic items and cultural artefacts. Among other cities of East Siberia, perhaps only the city Yeniseisk on River Yenisei could compare with Irkutsk by the number of preserved historic items from XVIII-XIX centuries. The status of historical city and great variety of museums, proximity to Lake Baikal and picturesque natural environment turn the city into a regular «tourist Mecca» of East Siberia.

Irkutsk is the city of diverse industries (more than 70 enterprises) — machinery construction, food processing, electric power generation, manufacturing of construction materials, etc. Most profitable are Irkutsk Hydro and Industries Amalgamated «Kedr». The line of «Kedr» products — a variety of high quality brands of vodka distilled by advanced technology that uses unique Lake Baikal water in the end-product, has faultless reputation and actively wins the international market.

Irkutsk is a major transportation junction of Trans-Siberian railroad, international airport, waterways on River Angara and Lake Baikal, a network of automobile roads (Moscow, Baikal, Kachug, Alexandrovsk and other highways). Irkutsk is a second-large scientific centre of Siberia after Novosibirsk. The prospects for the development into a major trade, finance, tourist, and hospitality center, as well as for the expansion of hi-tech industries are quite positive for Irkutsk.

Irkutsk is renowned and praised for the conservation of its rich heritage, inimitable charm of the wonderful, and actually not very distant past, the distinctive character of its urban traditions. A famous Siberian writer, Valentin Rasputin, noted: «А number [of cities] in contemporary [Russian] history were mutilated in the hurried and clumsy plastic surgery, in the reckless and thoughtless job of demolition and construction; Irkutsk, however, managed to save its looks yet, unlike another Siberian city, Omsk, which lost them completely, or Novosibirsk, which never had them.» (Rasputin, V. «Siberia, Siberia...» p. 132)

River Angara approaches Irkutsk in a tranquil expanse of the reservoir, and, gushing from the turbines, flows swiftly and majestically again. The mighty river divides the city into two major sections: a relatively compact downtown on the right bank, and the rest of the city stretching for more than 20 km along the left bank. The city-scape accommodates harmoniously the vast water plane of Irkutsk Reservoir, the dam of the Hydro that is straight as an arrow, the thick network of high-voltage transmission lines in the after-bay.

7 km downstream, beyond the bridges across River Angara, there is a hydrofoil service «Meteor» terminal, from where shuttles to Bratsk go every day. Sailing by are the city blocks, River Irkut estuary, freight terminals; after the passage under the second bridge, the city and its satellite municipalities Zhilkino, Bokovo, Irkutsk-II, Ba-tareinaya, keep stretching downstream along the left bank, while forest, and gardening cooperatives come into view on the right.

The stretch of River Angara between Irkutsk and Usol’ye-Sibirskoye crosses the most developed section of the Upper Riverside. Eventually all the way along the low left bank, there stretch, in almost uninterrupted sequence, the signs of civilization: blocks of apartments, industrial zones of the cities and towns, ports and terminals, summer cottages and gardening cooperatives, crammed between the river and the railroad. Characteristic for these reaches of the river is their bustling water traffic. The ships of the East-Siberian River Lines and of other ownership carry millions of tons of diverse cargo — non-metalliferous construction materials, timber in rafts and onboard, coal, petroleum products, etc.

The share on non-metalliferous construction materials exceeds 2/3 of the combined volume of freight. They are excavated primarily on the islands, banks and from the bed of River Angara. Uncontrolled excavations of sand and gravel led to the disappearance of numerous islands downstream from Irkutsk that used to be rich pastures, such as Berezovyi, Strekalovskii, Kruglen’kii, Nizhnii Bouyan, Barabanov, etc., and a fall of water level between Irkutsk and Angarsk by 60-70 cm. Due to that fall, river-arms turn shallow and disappear, shallow bays that are feeding and spawning habitats for fish dry away, normal operation of water-supplying stations is interrupted, and the conditions for navigation deteriorate. The volume of sand and gravel excavations from the river is constantly decreasing under the pressure of the community and conservation authorities, so there is still hope that the banks and remaining islands will bring joy to the eye of man for a long time yet to come.

The river-bed of Angara downstream from Irkutsk forks repeatedly into river-arms embracing small islands. Mean water temperature during the warm season does not exceed 10-12 C degrees there. However, even before the hydro constructed, the water temperature in the vicinity of Irkutsk was seldom higher. All the way along the stretch River Angara between the city Irkutsk and Bratsk Reservoir, sports fishing of grayling from anchored motor boats is very popular.

After 24 km of travelling by water downstream from Irkutsk, River Kuda flows into River Angara from the right. This is where the ancient Russian settlement Ust’-Kuda, founded in 1667, rests on the banks. There is the Kazanskaya Church (1804) there, the first religious quarters to be built after the canons of classicism in The Riverside. This is the place where the «Decembrists», the aristocratic leaders of attempted anti-monarchy military coup of December 1825, were exiled. Their favourite spot outdoors was the so called «Kamchatnik» — a beautiful orested cliff on the bank of River Angara, well in view from board ship.

Across and downstream from Ust’-Kuda, on the left bank of River Angara, there is the settlement Meget, beyond which the panorama of Angarsk that derived its name from the river, comes readily into view. The industrial zone of Angarsk stretches from Meget to the estuary of another major tributary of River Angara — River Kitoi for almost 20 km, cutting the city away from the river. Angarsk ship terminal is located nearby the estuary of River Kitoi, 62 km away from Irkutsk.

Angarsk is a comparatively young municipality, founded in late 1945 and officially denominated a city in 1951. It is the headquarters of petrochemical and chemical industries. Angarsk got ahead of other Riverside cities, except for the capital of the region, by its population (268.8 thousand people), while sharing with Bratsk the first and second positions by the industrial facilities. Angarsk Petrochemical Industries Amalgamated «Angarsknefteor-gsintez», the largest in the industry of the former Soviet Union, supplies its products to several thousand consumers throughout Russia and abroad. 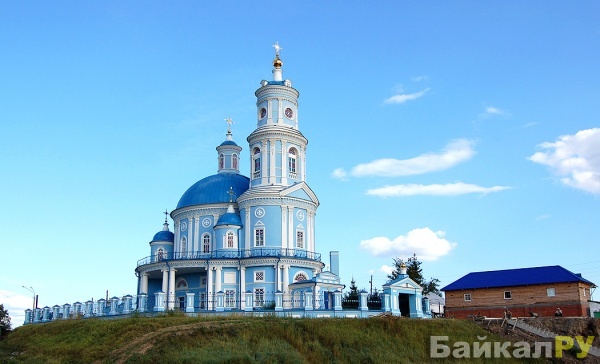 The city with high concentration of so many major industries is consequently rendered, as one of the major polluters of air and aquatic environment of The Riverside. One of the numerous sights worth seeing in Angarsk is the Clocks and Watches Museum, a most interesting and well-known establishment of the kind in Russia.

80 km west from Irkutsk, on the left bank of River Angara, there is an old settlement Tel’ma, founded in 1731, where the first (1732) metallurgical works in Siberia were operated. Certain products manufactured by those works were used to equip the ships for V. Bering marine explorations. A fulling mill was also founded (1733) there. A distinctive character of Tel’ma is lended by a well-preserved piece of architecture from early XVIII century, namely the Tel’minskaya (Kazanskaya) Church, along with certain pre-revolution buildings that are now occupied by a distillery and a garment-manufacturing factory. Down from Tel’ma, along the right bank of River Angara, there begin the lands of Ust’-Ordynskii Bouryat National District.

On the left bank of River Angara, 90 km downstream from Irkutsk, there is a third major city Usol’ye-Sibir-skoye (106.9 thousand people) along the river. «The City of Salt» is almost a contemporary of Irkutsk: salt mining started there already in 1669. The Usol’ye-Sibrskoye table salt deposit contains astronomic amount of over 200 billion tons of salt. The brine is used as raw material for both vacuum-extraction plant that produces the best brand of fine table salt in the country and a variety of other chemical works of Usol’ye-Sibirskoye Chemical Industries «Khimprom», whose product lines count more than 70 positions.