THE LEGEND OF ANGARA 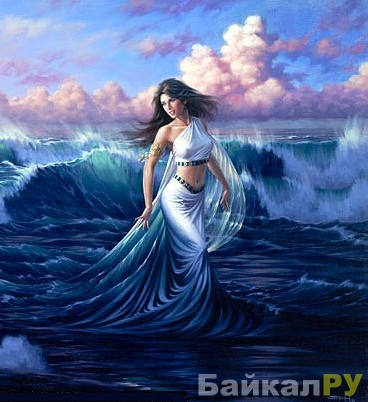 In the times of old, mighty Baikal was jovial and kindly. All of his heart was given to his only daughter Angara.

There was nothing under the heavens to supersede her beauty.

By day she was bright — brighter than the sky, by night she was dark — darker than a storm-cloud. Whoever passed by her, everyone marvelled at her, and praised her. Even the itinerant birds: geese, swans, cranes — descended nethermost, but seldom took to the water. They spoke:

—    Who dareth darken the bright?

The Old Man Baikal cared less for his own soul than for his daughter.

Once, while Baikal reposed himself, Angara betook to the flight to young fellow Yenisei.

There arouse the Father, splashing the waves in rage. Fiery storm broke, the mountains cried out, the forests collapsed, the heavens turned black with grief, animals scattered about the face of the Earth in horror, fishes dove to the very bottom, birds shot to the sun. Wind alone was wailing and the mighty sea was a raging. Powerful Baikal struck a grey mountain, broke a cliff away and hurled it after his fleeing daughter.

The cliff landed on the very throat of the beauty. Pleaded the blue-eyed Angara, choking and weeping, and begged:

—    Father, forgive me and let me have a single drop of water, for I am dying of thirst...

Cried out Baikal in fury:

For millennia, there flow the tears of Angara

towards Yenisei, while the lonely and grey Baikal turned gloomy and ominous. The cliff that Baikal cast after his daughter got the name «Shaman* Cliff» among the people. Rich sacrifices were offered to Baikal there. People used to say: «Should Baikal get infuriated, he would tear the Shaman Cliff away and the water will surge out and flood the Earth».

But it all had happened long ago, now the people are brave and do not fear Baikal any more...

*«Shaman» - Tungus/Russian term for a priest believed to excercise magic power (e.g. for healing and divination), especially through ecstatic trances.