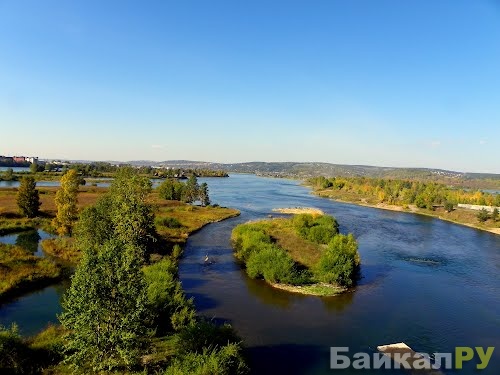 All but in the middle of Asia, amid the forested mountains of Siberian wilderness, there stretches the largest fresh-water lake of the world — Lake Baikal. Its waters, overflowing an underwater rock ridge, escape the depression in a powerful current and rush towards River Yenisei, evolving along their way of 1779 km into one of the greatest and most peculiar rivers of East Siberia — River Angara.

Angara river-basin stretches from south-east to north-west for 1100 km, bordering the basin of Lake Baikal in the south, that of River Yenisei in the west and in the north, and that of River Lena in the east. Administratively, the territory of River Angara watershed is divided between Irkutsk Region (64%), Krasnoyarsk Territory (30%) and Bouryat Autonomous Republic (Bouryatia) (6%).

The unique character of River Angara, its water regime, is in many ways determined by Lake Baikal, which drains more than 60 km2 of purest fresh water into the river annually. In the whole of Asia, Angara is the only river to emerge from a major lake in an immediate full-flowing current, thus ensuring the uniformity of its discharge throughout the year. The highest value of the headwater discharge for River Angara exceeds the lowest one by only 6 times, while this ratio is 55 for River Volga nearby Kuibyshev, 80 for River Yenisei nearby Krasnoyarsk, and 1000 for River Urals nearby the city Orenburg. This naturally regulated character of the river is exceptionally useful for hydro-electric power generation, aquatic transportation, water supply, etc. Additional regulation of the discharge is provided by the chain of artificial hydro-electric power plant reservoirs that have eliminated floods on River Angara, although, prior to the construction of the dam, there used to occur winter «ice-jams», unique natural phenomena associated with the powerful influx of the deep, comparatively warm water from Lake Baikal into the river. During freezing, which occurred unusually late in the year (December through February), the «ice-jams» used to take place where the river banks bottlenecked, suffocating the current with packed ice and causing a dramatic increase of the river level by several meters. Irkutsk, being the closest to Lake Baikal, suffered most from the damage, when the water flooded its downtown section at 30-40 C below freezing.

Before the chain of hydro-electric power plants was constructed, a specific water regime was characteristic of River Angara, the one fundamentally different from that of other Siberian rivers. During the period of turbulent floods on other rivers in spring, the water-level in the upper reaches of River Angara kept at its lowest, due to the minimum that the level of Lake Baikal reached in the mean time, and the highest level fell on late summer through early autumn, when Lake Baikal reached its maximum storage. In the mean time the level in other rivers was keeping at its all-time low.

The regulating effect of Lake Baikal is most pronounced in the upper reaches of River Angara. Downstream from Irkutsk, the river is increasingly affected by its numerous tributaries, primarily the rivers Irkut, Kitoi, Belaya, Oka, Ilim, Taseyeva that together increase the volume of the river before its confluence with Yenisei by more than

two times, that is, to 138 km3 a year. Yet Lake Baikal water accounts for the 2/3 of the annual discharge of River Angara as far downstream as the discharge section line of Bratsk, and only after its confluence with River Taseyeva, in its lowermost reaches, that ratio for River Angara decreases to 44%. The role of tributaries, however, is insignificant for the winter drainage of River Angara, thus the fact that winter volume of its discharge never goes below 1000 m3 per second is due to the regulating effect of Lake Baikal and the reservoirs alone.

At the confluence of rivers Angara and Yenisei, the volume of discharge of the latter falls short of that of the former by about one third. Actually, River Yenisei should probably be considered a tributary of River Angara, rather than the way it is currently accepted, as estimated by the volume of water and the width of the river. However, both historically (The river-bed of River Angara is by tens of thousand years younger than that of River Yenisei), and geomorphologically the «main» river is still Yenisei. Another case to count in favour of that conclusion is the fact of River Yenisei being rendered as a major deep waterway in the aquatic transportation classification, while River Angara, in spite of its volume and width, is listed in the category of those for limited local navigation because of its rapids.

Individual discharge of only six rivers of Russia, namely Yenisei, Lena, Ob’, Amur, Volga and Aldan exceeds that of River Angara. But there is no major river in Russia to compare with River Angara in purity and unique transparence of water, determined by the powerful influence of Lake Baikal. However, the natural purity of River Angara is essentially preserved only within the upper reaches of the river down to the city of Irkutsk.

Many a section of the river is to various degree polluted as a result of human development, though the water of River Angara is characterized by extremely low mineralization as compared to other major Siberian rivers: from the upper reaches downstream, the mineralization increases gradually from 96 mg/1 to 116-130 mg/1. Due to insignificant content of calcium, magnesium and chlorine, the water is rather soft, and more than 70% oxygen-satiated at any season. Experts can appreciate those unique figures at their true value. River Angara is also noticeably different from other Siberian rivers by its low content of suspended matter: its turbidity in the upper reaches is only 2-5 g/m3, the average for the whole river being 25 g/m3, while this value for Yenisei nearby Krasnoyarsk makes, for instance, 75 g/m3, the one for River Irtysh nearby Omsk is 150 g/m3...

An important feature of River Angara is its potential for hydro-electric power generation. Stability and strength of current, great altitudinal differential (378 m) from the upper reaches to the estuary determined its capacity for producing 93.3 billion of kWt/h of electricity, thus rendering it the third-large hydro-electric power resource in the country after the rivers Yenisei and Lena. High cost-efficiency of developing the hydro-electric power resources of River Angara is further supplemented by favourable geological and geomorpho-logical conditions of the river valley, the presence of «bottlecks» with both banks and river-bed of rock. Currently the combined production of electric power of River Angara chain of power plants exceeds 48 billion kWt/h. Both Enissei and Volga power plant chains are, respectively, second and third large as compared to that on River Angara.

The fauna and flora of River Angara, that has been developing under the influence of Lake Baikal, is also noticeably different from other Siberian rivers. The upper reaches of the river are inhabited by a variety of species migrating to and from The Lake. Midstream, only a few Lake Baikal species are to be found, much less downstream. The construction of the chain of hydro-electric power plants caused fundamental changes in the hydrobiological regime of River Angara, greatly obstructed natural communication between the river and Lake Baikal and led to a considerable shift in its constituent animal and plant species.

River Angara is known not only for the uniqueness ofits water-regime, the volume of its discharge and hydro-electric potential, transparence and purity of water in its upper reaches. Its basin is the richest accumulation of various natural resources in the country. Favourable combination of fuel and energy, minerals, timber, land, aquatic and recreational resources is to be found there. Angara Riverside region holds countless riches in the entrails of the earth, where iron ore, rock salt, lead, zinc, black and brown coal, alabaster, talcum, gold, magnesites, asbestos, phosphates, quartzose sand, polymetal ores, lie in stock.

The treasures of Angara Riverside attracted man since times immemorial. People were developing The Riverside, building settlements along the banks of the river that always helped them. The rivers served as waterways and fisheries first, later timber rafting and water supply were added to the list, and then hydro-electric power generation.

A large-scale development of the river basin in the vicinity of Irkutsk started with the major hydroelectric construction in the ’50s. There is, perhaps, no other region in the country nowadays where so high a degree of gravitating of the population and economy towards rivers would be observed. About 95% of the urban population and industries are located along the banks of River Angara and its major tributaries, the immediate vicinity of River

Angara proper and its reservoirs therewith housing 3/4 of the total urban population of The Riverside. All of the major cities with the population exceeding 100 thousand people — Irkutsk, Angarsk, Bratsk, Ust'-Ilimsk, Usolye-Sibirskoye, are located along River Angara. 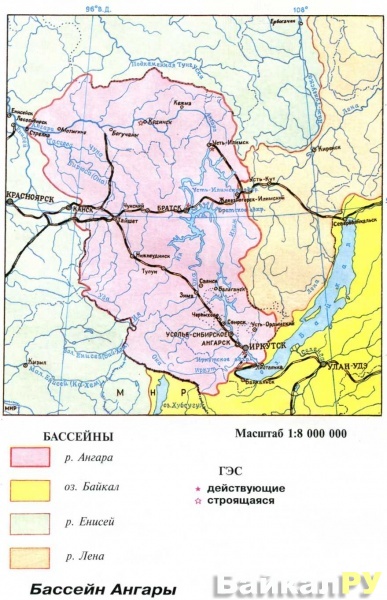 Angara Riverside nowadays is a major region of heavy industries with developed hydro-and thermal electric power production, non-ferrous metallurgy, petrochemical and general chemical industries, pulp and paper production and machinery construction. The territory populated by less than 2.8 million people (or 1.9% of the country population) currently produces more than 35% of Russian aluminium, 16% of pulp, about 15% of timber products, about 7% of electric power, takes a considerable share of coal and iron ore mining, gasoline and diesel fuel refining, washing soda and plastics (PVC) production. The strongest territorial-industrial complexes (TIC), those of Irkutsk-Tcheremkhovoand Bratsk-Ust’-Ilimsk, developed around River Angara Chain of hydro-electric power plants in Irkutsk Region, the Nizhneangarsk TIC being under development in Krasnoyarsk Territory. A characteristic feature of the economy of The Riverside is the fact that the level of industrial concentration by far exceeds the average for Russia: a lot of industrial installations there being the largest either in Siberia, or in the country, or even in the world (Angarsk Petrochemical Industries Amalgamated «Angarsknefteorgsinez», Usol’ye-Sibirskoye Chemical Industries «Khim-prom», Bratsk and Ust’-Ilimsk Amalgamated Timber Works, Bratsk and Irkutsk Aluminium Plants, etc.).

Very recently it was still something to be proud of. Nowadays, there shaped the understanding that the scale of industrial development based primarily on obsolete resource-inefficient technologies is associated with huge amounts of waste, discharges of harmful substances into the atmosphere and drain of sewage into the unique river. Up to 2 km3 of sewage, mostly insufficiently treated or untreated at all, is discharged into the rivers and reservoirs of River Angara basin annually. By the level of anthropogenic load from sewage, the basin of the river also stands ahead of the basins of other Siberian rivers, as well as in all of Russia there is a single basin of River Volga that receives more polluted discharges than the basin of River Angara.

The scale of transformation of the natural water regime by the chain of high-pressure hydros determined the individual standing of Angara River basin among other river basins of Siberia. Continuous overflow of the river was obstructed and separated into a chain of low-flowage reservoirs (Irkutsk, Bratsk, Ust’-Ilimsk Reservoirs) in which, due to the deccelerated rate of water-exchange, weaker mixing, rotting of vast amount of sunk wood, the self-purification capacities of water deteriorated sharply. Hence follows the complexity and acuteness of the ecological problems of the region.