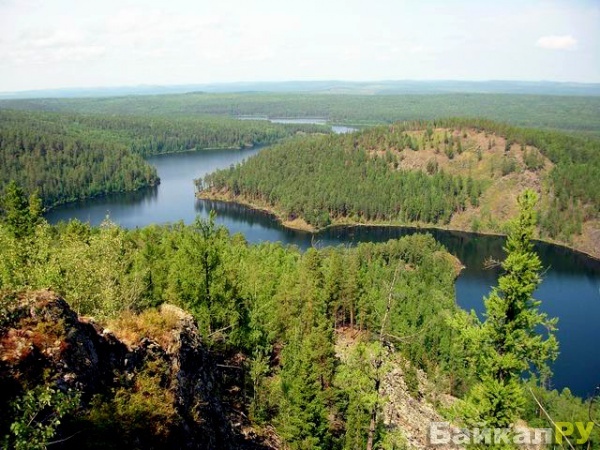 In the immediate vicinity of the after-bay of Bratsk Hydro (1110 km from River Angara upper reaches), the affluent of the next power plant of the Chain could be perceived. Ust’-Ilimsk Reservoir was accumulating its full storage between the years 1974-1977. Working on a well-regulated, by the two preceding reservoirs, discharge of River Angara, only seasonal regulations of the level are operated there that do not exceed 1.5 m. However, it is also rendered as a major artificial water-body, its volume being 58.9 km³, the area of water-plane 1992 km², and the stretch of the main Angara Reaches 269 km. Average depth increases downstream towards the dam from 16 m to 49 m, maximum depth 94 m, average width keeps within the range between 1.8 and 6.4 km.

As distinct from Irkutsk and Bratsk Reservoirs, travelling within Ust’-Ilimsk Reservoir is impeded to a degree due to the absence of passenger traffic there, thus either commercial ships or private charters are the only available means of transportation. The coasts are thinly populated: the entire Angara Reaches counts only six logging settlements on its left bank. They are connected with the «mainland» by the automobile road Bratsk-Ust’-Ilimsk. This water-body is forthose who are fond of «wild» nature.

In the uppermost reaches from Bratsk Hydro down to the settlement Sedanovo, the reservoir retains its riverine and lacustrine-riverine character for 100 km: a comparatively narrow bed with average width of 2 km and average depth about 16 m, the velocity of current up to 1 m/c, while the water-temperature does not exceed 8-9 C degrees during the warmest months of summer. The sewage of Bratsk that sharply deteriorates the quality of water, is discharged through River Vikhorevaya into the Vikhorevsk bay on the left bank of the reservoir. There is a new automobile road in the vicinity of Sedanovo that branches from the highway Bratsk-Ust’-Ilimsk towards Bogutchansk (Kodinsk) Hydro currently under construction. Certain localities along the shores reveal trapps — peculiar erupted rock structures that occurred at places where magma broke through narrow cracks in the earth crust. The reservoir flooded the deadliest Angara rapids — Podkamennyi (Pokhmel’nyi), P’yanyi, Padunskii, Dolgii and Shamanskii that is closer to River Ilim estuary, in the vicinity of the outcrop of those trapps.

Downstream from Sedanovo, there are Sedanovo and Shaman expansions, where the width of the reservoir reaches 6.6 km and average depth increases to 31 m. Beyond the expansions, the bed narrows abruptly to 1.4 km, and flows on within the so called Mogudal’skoye Constriction for 45-50 km. Steep forested slopes, the curves of River Angara valley, the outcrops of trapps lend inimitable charm to those deserted regions. The water heats up to 17-18 C degrees there.

Before the village Yershovo (190 km from Bratsk Hydro), the reservoir expands again, and the average width of it keeps to about 2.8 km, reaching the Vorob’yevskoye Expansion of 10 km. Of municipalities, there are only two settlements Yershovo and Edutchanka there. The vicinity of the dam 48 km long (downstream from the Ilimsk Reaches inflow) has average width 5.4 km, mean depth about 50 m and maximum depth 94 m.

Only the rafts towed from the coastal rafting installations to Ust’-Ilimsk for processing, enliven the landscape. In bays and along the shores, there are large areas of live-flooded forest. While the impression of Bratsk Reservoir is mostly spoiled by «mismanaged» aimlessly drifting wood, semi-submerged forest with protruding skeletons of trees produces most distressing impression of the Ust’-Ilimsk Reservoir.

The transit port of Zheleznodorozhnyi settlement, where the timber trans-shipment from rafts to the railroad is operated, is the first to meet the traveller in Ust’-Ilimsk from the reservoir (Karaptchanskii bay). A young, rapidly growing city (113.5 thousand population) stretches freely on both banks of River Angara; automobile road from Bratsk approaches it from the left bank, while the railroad from Khrebtovaya approaches it from the right. Its two parts are interconnected by the dam of Ust’-Ilimsk Hydro and a bridge. The second-large industry there, excluding the power plant, is the Ust’-Ilimsk Pulp and Paper Industries Amalgamated, that are in turn second-large single pulp manufacturer in the country after Bratsk Pulp and Paper Industries Amalgamated.

Ust-Ilimsk is the historical successor of the flooded old Ilimsk, the second (after one in Rybinsk) Russian outpost in the Angara Riverside and the first within the territory of contemporary Irkutsk Region, founded on River Ilim in the distant year of 1630, and granted the status of a city already in 1649. Before the leading part in the region shifted to Irkutsk, it was precisely Ilimsk that was playing the main role as Russian outpost on the immeasurable long way from Yeniseisk to the Pacific, while the renowned Ilimsk Farmlands supplied agricultural products not only within The Riverside, but to Yakutiya and Russian Far East as well. In the course of time Ilimsk was, however, disconnected from the major transportation junctions, lost its status of a city and turned into a little-known settlement and a place of exile, which fact made a major contribution to the preservation of the pieces of architecture from the XVTI century, later relocated to the Museum of Architecture and Etnography nearby Irkutsk.

Nowadays, above the site of former Ilimsk and Ilimsk Farmlands, there wash the waters of Ilimsk arm of the Ust’-Ilimsk Reservoir, 220 km long and up to 6.4 km wide in the midsection. The affluent penetrates somewhat beyond the settlement Shestakovo, located at the intersection of the river and the railroad. 20 km east from River Ilim, there grows another young city Zheleznogorsk-Ilimskii (32.8 thousand population), the headquarters of Korshunovsk Ore Beneficiation Plant, the one of the top ten single producers in the industry. The population of more than 30 ancient villages was relocated to new settlements from the plentiful valley of River Ilim before the flooding of the reservoir. Nowadays there are mostly loggers’ settlements along the shores and bays of Ilim arm: Suvorovskii, Bereznyaki, Igirma, Novaya Igirma, Yan-gel’, Zamorskii, Radishev, Brusnitchnyi, Kedrovyi, Tubin-skii, Dal’nii.