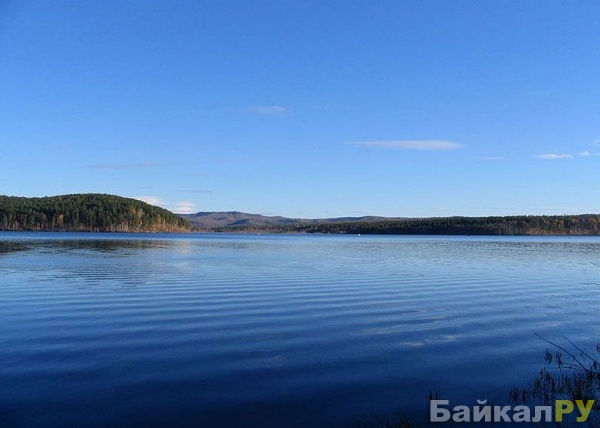 Irkutsk Reservoir is the first in the River Angara chain of artificial water-bodies. It originated as a result of the construction of the dam of Irkutsk Hydro in 1956 and was accumulating its full storage for 7 years. Meanwhile the affluent of the dam forced its way back into Lake Baikal, raising its average long-term level by 1 m. Thus, on the one hand, the valley of River Angara turned into one of the bays of the lake, and on the other the great lake itself became the main regulating force behind Irkutsk Reservoir. In fact, the effective volume of Angara section of the reservoir — 0.45 km3 is responsible only for diurnal discharge regulation, while the effective volume of its Baikal section — 46 km3 (that is, two orders of magnitude higher) enables both long-term and annual regulation of discharge and provides for the uniformity in the work of the entire chain downstream.

Irkutsk Reservoir is relatively small as compared to other giant artificial «seas» on rivers Angara and Yenisei. Its total length from the upper reaches to the dam is 56 km, water plane area 154 km2, volume 2.1 km3. The reservoir is rendered as a shallow water-body: its average depth is 13.6 m, maximum depth nearby the dam is 35 m, its width keeps within the range of 1 km at the river-head to 3-4 km nearby the dam and 7 km in the vicinity of Kurminskii Bay.

Irkutsk Reservoir is easily accessible for transportation and is being extensively employed for recreation. Baikal Freeway runs along its right bank connecting Irkutsk with Listvyanka. From the city hydrofoil terminal, there is a regular service of comfortable and fast passenger ships shuttling between the city and Lake Baikal. Local line Irkutsk-Kurma is serviced by powered ship «Zarya» that makes stops along the left shore in Mel’nichnaya Pad’, Grudinino, Kartakoye, Bolshoi Kalei, Kurma.

A cruise of Irkutsk Reservoir usually starts from the terminal in Listvyanka. The section from the upper reaches downstream to the village Bol’shaya Rechka is a rather narrow passage 0.6-1.8 km wide. The mountains on the left bank come close to the water edge. The right bank is lower, leaving only a narrow strip of ground for Baikal Freeway. The elevated and forested left bank looks quite deserted, there is seemingly no indication of human presence there. But before the construction of Irkutsk Hydro, Trans-Siberian railroad used to go there, now flooded below the level of the reservoir.

Of the old settlements, only a few remained in their former locations in the uppermost reaches of River Angara — Listvyanka, Port Baikal and Nikola. A chapel of Saint Nikolas, the protector of seamen, was built in Nikola in XVII century to bless the sailors in their difficult and hazardous passage across Lake Baikal.

12 km downstream, there is the largest (2.2 thousand people) settlement in the vicinity of the reservoir — Bol’shaya Rechka. There is a mink breeding farm, a shipyard and certain timber-processing works there.

Downstream from Bol’shaya Rechka, the shoreline gets more articulated. More than 40 bays developed in the reservoir, some of them penetrating by 2-5 km inland, the largest one — Kurminskii Bay, for 10 km. The right bank is flatter and better developed. There are more than 40 gardening cooperatives and summer-cottage settlements, sanatoriums and recreation lounges, holiday and sport camps there.

18 km downstream from the upper reaches, on the right bank, there huddles a small settlement Tal’tsy, close by which (47th km of Baikal Freeway) there is the Museum of Architecture and Etnography of Angara Riverside Nationalities («Museum of Wooden Architecture» for short), opened in 1980. One can get acquainted with the original and distinctive architecture of The Angara/Ilim Riverside region — the Spasskaya Chapel and Kazanskaya Church from Ilim Fortalice (1676) that were relocated to avoid flooding by the Us’t-Ilimsk Reservoir; with the typical Riverside village households, a chain of water-mills. It is worth mentioning that there are only six XVII century wooden towers from old fortresses in the whole country, and three of them are located within River Angara basin. The Bouryat etnographic department — a traditional nomadic camp with caribou-hide tents and other artefacts of itinerant caribou ranchers also has great educational value.

Burduguz, a small village on the right bank of the reservoir (26 km downstream) is known for its fish-farm that helps to replenish the fish-stock of Lake Baikal and River Angara reservoirs with young omul, peled, white-fish, Siberian lake herring.

Downstream from Kurminskii Bay, the left bank is already being developed. Campings and recreation lounges, summer cottages and gardening cooperatives mushroom there.

There is a lot of large and picturesque bays along the banks of the reservoir that are well-heated in summer. While in the upper reaches of the river the water temperature in bays does not exceed 10-12 C degrees during the warm season, the upper layers of water heat up to 20 C and above in those closer to the dam; they make good swimming and are actively used by the population of Irkutsk for rest and recreation. On hot summer weekends almost all of the comfortable spots along the bays close to Irkutsk are crammed with campers. Motor boats, cutters, ships glide by in an uninterrupted stream, snow-white sails of yachts make beautiful sight. The bays provide quite good spinning reel and rod fishing of pike, perch, roach and other species.

As seen from the reservoir water-plane, Irkutsk is visible from afar — the illumination of the big city and the dam being most beautiful and impressive in the dusk and dark. Yershi water supply station that is located on the left bank 2 km upstream from the dam, provisions the best drinking water in the world from Lake Baikal for the population of Irkutsk and its satellite town Shelekhov. Close to the dam, on the right bank, there is anchored the ice-breaker «Angara», the one that used to facilitate the operation of Lake Baikal railroad ferry service, the third in the world and the first in Asia then, now converted into a museum. The cruise of the reservoir ends at the hydrofoil terminal «Raketa», not far from the ice-breaker museum.