THE ENERGY OF THE CHAIN 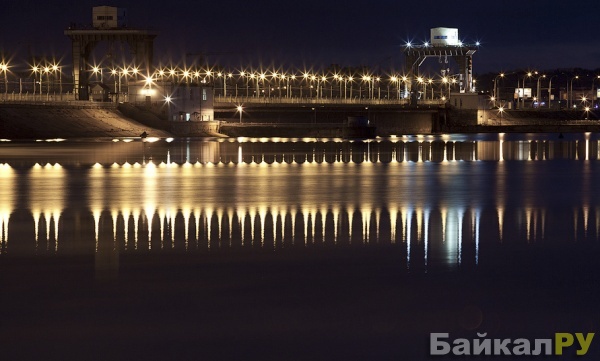 The use of water as a source of energy has a long history in The Riverside: the energy of falling water in small rivers and streams was setting in motion the water-wheels of mills and other works a long time ago. A large-scale development of hydroelectric power generation, however, started in the ’50s of the present century on River Angara.

The first-born of the Chain — Irkutsk Hydro, is small as compared with other River Angara power stations: its installed capacity is 0.66 million kWt, average annual generated output 4.1 billion kWt/ h. Most impressive are those parameters for Bratsk Hydro, the largest one, that has the capacity of 4.5 million kWt and the output of 22.6 billion kWt/h. Those parameters for Ust’-Ilimsk Hydro are only slightly lower, being 4.32 million kWt capacity and 21.7 billion kWt/h output. The design capacity of Bogutchansk Hydro is expected to reach 4.0 million kWt and the output 17.1 billion kWt/h. The three operating Hydros of River Angara Chain generate a combined average of 48 billion kWt/h of electric power, that makes about one third of the total electricity generated by all hydro-electric power plants of Russia.

Hydro-electric power plant construction in River Angara basin was always regarded as both a constituent of technical progress and a structural foundation for the facilitation of fundamental reconstruction of the economy of the adjacent territories. Both the acceleration of development of the existing cities (Irkutsk and Angarsk), and the appearance of new municipalities — Shelekhov, Bratsk, Ust’-Ilimsk, Kodinsk, are associated with the construction of hydro-electric power plants. The effect of hydro-electric power generation on the economical growth was most pronounced in the underdeveloped wilderness of the Mid-Riverside, where Bratsk and Ust’-Ilimsk Hydros pioneered in the development of the territory and finally led to the formation of the strong territorial-industrial complex there. It is presumed that a similar part for urban and rural development of the Lower Riverside could be played by Bogutchansk Hydro.

However, the creation of the River Angara Chain brought fundamental changes into the natural and economical conditions and resulted in serious negative effects on the environment. Most characteristic, and extremely unwelcome consequences of hydro-construction refer to the development of the biggest water-and energy-consuming industries, that are a considerable risk from the ecological point of view, in the vicinity of major hydros. Those also are the areas with higher population density: 2/3 of the present urban population lives within a limited territory around the three operating hydros, something that takes only 5% of the total area of The Riverside. However, a decrease in population was registered for the first time in the growing city Bratsk in 1993. The analysis revealed that one of the main reasons that make the people leave the city was its pollution.

No doubt that a lot of the present ecological and social developments could hardly be prognosticated then, though the issues of natural conservation and certain specific features of The Riverside were insufficiently accounted for in designing of the River Angara Hydro Chain and selection of sites for the construction of dams. The most fertile riverside farmlands were flooded by the reservoirs. The traditional pattern of flood-plain valley agriculture and population distribution was completely destroyed in the forested zone, which resulted, in particular, in acute food-supply problems in Irkutsk Region. The total area of flooded arable land amounted to 320 thousand hectares, or about 10% of the present area of farmlands of the Region. Due to the cut-backs of the design area and inefficient operation of forest clearing, more than 35 million m3 of timber over the area of hundred thousand hectares, went under water.

Nowadays, the negative effects of the creation of the reservoirs are quite evident, thus the once enthusiastic attitude towards hydro-construction and its prospects was replaced in recent years by one sharply critical and negative. The construction of the proposed Sukhovskaya and Tel’ma Hydros does not appears feasible at present due to large areas of flooding within the developed industrial zone of Irkutsk and Angarsk. The creation of a chain of low-pressure Hydros — Nizhneangarsk, Vydumsk and Strelka is also complicated by a number of ecological, social, and economical limitations. Due to the acuteness of social and financial problems, the prospects of the completion of Bogutschansk Hydro are also in question.

The Riverside sacrificed a lot in the construction of high-pressure hydros and extensive reservoirs. Instead, the region got a stable power supply and investments into its social programs. The imputed rent from hydro-electric power generation covers 20-30% of the annual income into budget of Irkutsk Region. Stable and efficient operation of River Angara Hydro Chain on the basis of renewable hydro resources depends on neither political, nor economical disturbances, and provides for the fairly stable functioning of the economy in The Riverside.